Red Roof lets you know which hotels have the fastest WiFi.

Red Roof Inn, which manages or licenses about 450 hotels across the country, is designated those hotels that offer the fastest free Wi-Fi. (Red Roof Inn) 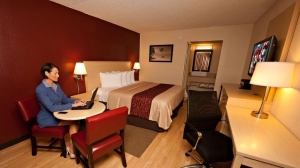 Many mid-level and economy-priced hotels across the country already offer free wireless Internet. But how many have free Wi-Fi that is fast enough to stream video?

Red Roof Inn, the economy lodging company with about 450 properties across the country, has launched a program to designate those hotels that have speeds fast enough to watch movies and video. Most Red Roof hotels are privately owned and operated, with franchise agreements with Red Roof.

Instead of just promising fast Wi-Fi, Red Roof said it is employing a third-party company, Morse Technologies, a tech firm based in New Hampshire, to verify when its hotels have bandwidth fast enough to stream TV and movies.

Those hotels that offer the fast “verified” Wi-Fi will earn a special designation on the RedRoof.com website and on billboards adjacent to the hotels.

The program began in the last month with properties on the East Coast, with a nationwide launch expected soon, Red Roof representatives said.